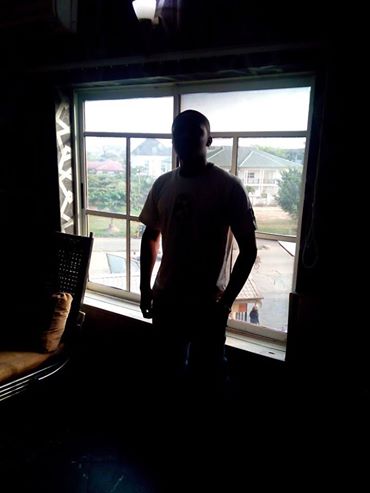 Fiery in Silhouette….a subliminal hint of things to come….

We started 2014 pretty much expecting it to be an amazing year (as most people do every year)…it ended up beating all our expectations. Even when the year started quite bleakly and we found out that absolutely no one, and by no one I mean, living or dead would give us funding to make/finish our film, and yet we braved on, oftentimes psychotically, but all for the love of film, we marched on, and with zero budget we finished the zombie thriller OJUJU. A film we made as a way of saying “Hey we can create something out of nothing. Do give us something and we will do epic things.” and frankly wasn’t expecting much from it, went on to premiere at the prestigious Africa International Film Festival where it won the award for Best Nigerian Film, beating many Nollywood big budget heavyweight films of the category and shocking every single industry person in attendance, us especially.
Like that wasn’t enough, the amazing Todd Brown of the Raid: Redemption and Raid 2: Berandal fame gave OJUJU an amazing review on his world renowned website, Twitch Film.
The same zero budget film will be doing a few more tours, having been accepted in a handful other film festivals around the world, beginning with the Pan African Film Festival in Los Angeles come February. If that isn’t the very definition of amazing, I really don’t know what is. Every time I think about film, and how much I love film, and how damn lucky I am to be able to live a childhood dream, I get goosebumps.

I am mostly grateful to the awesome team we’ve been able to build at Fiery Film. Some of the most awesome and patient human beings you would ever meet. No kidding. And to say I owe them my blood and sweat doesn’t even begin to describe the level of indebtedness I feel toward these fine men and women of immense talents and skills. If not for these guys, I would have been still out there doing my redundant 9-5 rounds (like an Ojuju), with absolutely nothing to look forward to, except the day of my death. But thanks to them, my life has the touch of God. From my chick/wife/producer/business associate, to my amazing cinematographer/big brother, to my talented production designer, set decorator and composers, and actors – you guys are just too much for me. The support and belief in me that you guys have, I’ll be honest I don’t know where the hell that comes from. I mean, 2 seconds ago I was a kid watching the Hammer House of Horror films and drawing my comic rendition of 80s cinema and here I am – a full time filmmaker. Doing it. How many people get that lucky before they die? I mean, actually live their dream? How many? I get goosebumps right now even just thinking about all these things. Sometimes I feel like I’m about to explode with so much joy.
2015 is going to be another epic year! You know it. She knows it. He knows it. They know it! We just don’t know how epic it’ll be as per specifics. But the spirit has spoken, and the vision has been revealed. Even walking upright we see it, standing and falling into a trance, we behold it. A glorious paradoxical experience.

In early 2015, Fiery Film will embark on its next feature film project. A crime gangster thriller titled O-Town. I’ve been trying to have this film made since 2011, way before OJUJU. But as all things in life, when its time its time. I am highly excited about this project, which is sort of a semi autobiographical homage to the town of my birth, Owerri. I’ve always been a huge fan of small town stories, growing up on Stephen King novels oftentimes set in the small fictional towns of Maine, as well as falling in love with early films from the Coen brothers, Gus van Sant, and the likes. I always wanted to marry that universe with my universe and my reality – much like how I desired to marry the world of zombie pop culture to a generic slum somewhere in the heart of Lagos metropolis. O-Town is my exploration into genre filmmaking; and as a semi autobiography it is a mirror, as well as a marsh up of many of the gangster stories I knew and heard growing up. The fun part of it all will be in the characters, and anyone who knows me knows I’m big on characterization. On O-Town I plan to just kick back and have a lot of fun with the characters, in a more ‘zenned’ out state of being, quite unlike the case with the making of OJUJU, which in no small way was/is a huge contribution to my learning trajectory as a filmmaker.

In the new year, we will be launching the official Facebook page for O-Town, where every single update and news reel regarding the project from pre production to production and so on, will be posted. Also, in the new year we will be announcing a newly refurbished Fiery Film website. Our webmasters are hard at work on that, and they’ve been amazing and patient with my “tax master” demands! This will also be accompanied shortly by the launch of the O-Town Official website. We’re almost done with the casting for O-Town, and I’m already excited at the crop of talents I have already. These guys are gonna shake up the world of acting in these parts, that’s for damn sure. I still haven’t made the choice on my two female leads. We got way too many submissions and pitches for the parts, and as you would imagine I’m after that something extra, and not just a pretty face and nice figure. That’s a dime a dozen. But real talent, now that’s the tricky part. The year hasn’t even started and we’re hard at work already. If there’s anything I’ve learnt being a Nigerian and living in Nigeria – no one’s gonna give you any free meals. You are ON YOUR OWN! So if you want something you’ve got to work a gazillion times harder for it than in any other country – because all the forces are against you to fail – But if you persist and if you’re lucky, a group of talented people who believe in you will be drawn to you, as they did me. And that’s when the real fun truly begins.
Again, I’m really excited about 2015. Can’t actually recall being excited about any new year as I am for 2015. I look forward to meeting and collaborating with new people, discovering new talented people, and just creating. I look forward to exploring new forms of artistic expression, as I can’t stay with all this juice bottled up inside. No one can.

I look forward to every upcoming filmmaker like me, living and creating and dreaming. And getting closer….and closer….and closer to that glorious apotheosis, whereby we shall all attain godhood. Yea, even as it was intended from of old.

Sorry, the comment form is closed at this time.